Read about the colorful history of the Sky Ryders by choosing one of the following decade tabs.

The organization was first established in 1952 as a junior corps, originally called the Lysle Rishel Post 68 Drum & Bugle Corps and led by director Ken Fairbrother, a former member of the Hawthorne Caballeros. In 1955, under the direction of H.D. “Prof” McCosh, the corps was reorganized and adopted the name Sky Ryders. They won their first American Legion Kansas state Championship in 1959. Their original show repertoire was based on the sky: Blue Skies, Over the Rainbow (from The Wizard of Oz), U.S. Air Force Song (Off We Go into the Wild Blue Yonder), and Ghost Riders in the Sky. In 1957, they won several Kansas state competitions and in 1959, they started competing in American Legion national competitions. 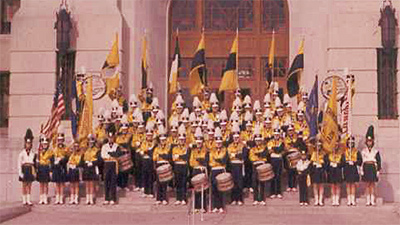 In 1960, the Sky Ryders won both the Kansas and Missouri state American Legion titles and traveled to Miami, Florida to compete in the American Legion Nationals. Over the next several years, the corps continued to be competitive on the state and national levels, but fell on hard times in 1966 and almost folded. They survived with the addition of members from their feeder corps, the Jets.

Between 1967 and 1969 they added girls to playing sections, purchased a new set of Getzen bugles, and traveled out of state to compete in Iowa, Illinois, and Wisconsin. In 1969, brass instructor John Simpson recruited Larry Kerchner to collaborate on the corps’ music. The corps had a successful year, winning the Kansas American Legion title, and competing at the American Legion Nationals in Atlanta, Georgia. The Sky Ryders were one of the first corps to make the switch from French horns to mellophones for mid-range voices. 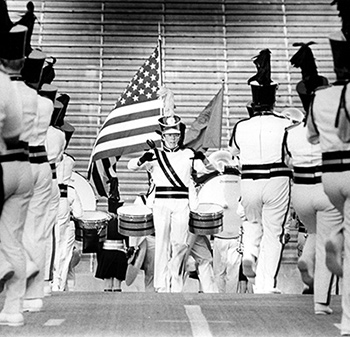 In spite of a couple weak seasons to begin the decade, the Sky Ryders were among the first corps to compete in Drum Corps International’s first competition in Whitewater, Wisconsin in 1972, finishing in 20th place.

During the early 1970s, the corps was almost exclusively populated by local Hutchinson, Kansas talent. Beginning in 1977, membership began to grow with the influx of members from outside the local area and they placed 3rd in Class A Prelims at the DCI Championships in Denver, Colorado. In 1978, the corps switched from Class A to Open Class and had increasing success, placing 32nd in Denver, Colorado and 22nd in Birmingham, Alabama.

During the late 1970s, corps director George Tuthill and brass instructor John Simpson continued to attract talent from nearby Oklahoma and Texas. Kerchner’s unique and melodic arrangements were popular with fans and judges.

In the early 1980s, Tuthill set out to get the Sky Ryders into DCI’s elite Top 12. In 1980, they placed 17th in Birmingham, Alabama and placed 14th in 1981 in Montreal, Quebec at the first DCI Championship outside the United States. In 1982, Tuthill’s goal was accomplished with a 10th place finish in Montreal’s Olympic Stadium. The corps performed a Spanish-themed show, including Faces, a medley of Quien Sabe (from Cuban Fire Suite), La Virgen de la Macarena, and Dr. Macumba, and a medley of Come in from the Rain and Over the Rainbow. 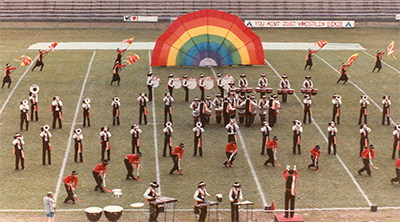 The corps’ huge rainbow flag, unfolded behind the corps during their show and displayed in the stands afterwards, as well as their closing number, Over the Rainbow, quickly became recognizable Sky Ryders trademarks—popular traditions that continued for several years. In 1983, the Sky Ryders received particular attention performing Kerchner’s Grammy-nominated jazz arrangement of Home on the Range. The season started out with a closer of Heart Light from the film “E.T.,” but due to pressure from judges and fans, they switched it back to the popular medley of Here’s that Rainy Day and Over the Rainbow from previous years. For the second year in a row, the corps placed in DCI’s Top 12, this time with a 12th place finish in Miami, Florida.

The corps dropped out of DCI Finals in 1984, placing 17th in Atlanta, Georgia. In 1985, the corps had a stronger year with a 15th place finish at Camp Randall Stadium in Madison, Wisconsin, performing the first of two productions of “The Wizard of Oz.” 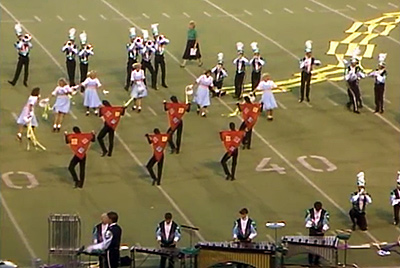 Starting in 1986, under the direction of alumnus Dale Antoine and a design team led by Tommy Keenum, the Sky Ryders again entered DCI’s Top 12. Over the next three years, they entertained audiences with emotional productions of the popular musicals “The Wizard of Oz,” “West Side Story,” and “The Sound of Music.” Their “Wizard of Oz” show in 1986—significantly improved from the previous year—included elements such as a Wicked Witch on a bicycle, gold lamé “yellow brick road” flags, and colorful guard costumes for the various characters in the film. The show repertoire included recognizable tunes from the musical, such as Ding Dong the Witch is Dead, If I Only Had a Brain, We’re Off to See the Wizard, and the corps’ traditional closer Over the Rainbow. They finished the year with the corps’ highest placement of 9th in Madison. 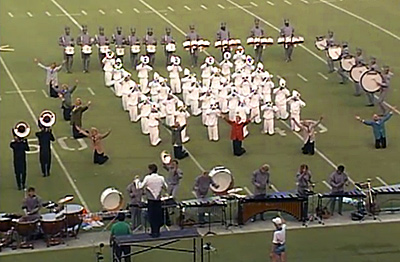 In 1987, the Sky Ryders fielded another theatrical show in Madison, this one based on the musical “West Side Story.” The brass players were divided into all white or all black uniforms while the percussion players were dressed in all gray. The white and black uniforms represented the two rival gangs from the musical—the American Jets and Puerto Rican Sharks. The gray uniforms represented the neutral combination of the two.

Marc Sylvester’s marching drill cleverly separated the colors for most of the show until the end when they combined in an embrace between pairs of white- and black-uniformed performers. On-field tall black panels and a multi-story scaffolding allowed color guard members to switch between a range of colorful outfits.

Visual coordinator Tommy Keenum decided to portray the storyline of Stephen Sondheim’s lyrics in addition to the dramatic music of Leonard Bernstein. Several scenes from the musical were portrayed, including the mock courtroom judgment by Officer Krupke, the “rumble” between the rival gangs, and even the tragic deaths of Bernardo and Tony. During the closer, matching striped guard flags filled the field with an explosion of color. In the end, an angelic Tony joined Maria and they ran out of the stadium hand in hand as a mellophone soloist played the final notes of the show facing the back stands. The corps finished the summer in 12th place.

The Sky Ryders returned in 1988 with a show based on “The Sound of Music” by Rodgers and Hammerstein. Similar to previous years, the production was filled with a rainbow of colorful guard costumes, inventive props, and tunes from a popular musical. The show opened with a medley from the musical’s Overture, featuring the title song in which Julie Andrews famously sings “the hills are alive with the sound of music.” 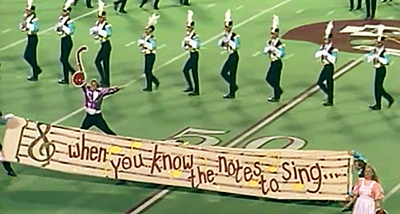 During the song Do-Re-Mi, members of the guard unfurled a large banner with lyrics and jumped up with large prop notes in rhythm to the music to encourage the audience to sing along with the entire corps. During the drum feature The Lonely Goatherd, the snare players juggled a tennis ball along with their drumsticks. The corps played a quick-tempo jazz arrangement of My Favorite Things and finished the show with a medley of Edelweiss, Climb Ev’ry Mountain, and a reprise of previous melodies. Once again, the corps remained in DCI’s Top 12 with a placement of 12th in Kansas City’s Arrowhead Stadium.

The corps switched directions in 1989 with cadet-style uniforms and a darker-themed show, including March (from Symphonic Metamorphosis) and selections from Carmina Burana. The corps finished the season with a Semi Finals tie for 14th place in Kansas City.

Due to financial difficulties, the corps almost folded in 1990, but fortunately remained active by moving to DeSoto, a suburb of Dallas, Texas. The black uniform pants of 1989 were replaced with white and the corps performed a brighter show including Savannah River Holiday, Wonderful Town, Divertimento for Orchestra, and John Williams’ Liberty Fanfare. After the challenging move to Texas, the corps finished the season in 19th place during DCI Semi Finals in Buffalo, New York. 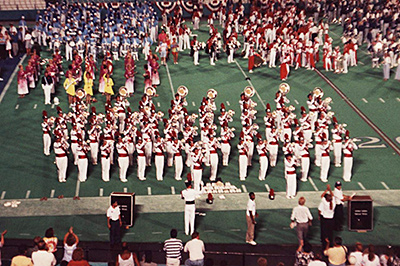 In 1991, the Sky Ryders once again placed in DCI’s Top 12 with a return to the corps’ tradition of popular musicals, this time with Lerner and Loewe’s “Camelot.” Musical selections included Fanfare Theme, Overture, If Ever I Could Leave You, I Wonder What the King is Doing Tonight, Parade, How to Handle a Woman, and If Ever I Could Leave You Reprise. The corps placed 12th in DCI Finals in their new hometown of Dallas.

The corps performed another popular Lerner and Loewe musical in 1992 with the Scottish-themed “Brigadoon.” Their uniforms were accented with plaid material on the shakos and a matching plaid baldric over one shoulder. During DCI’s 20th anniversary in Madison, Wisconsin, the corps placed 15th in Semi Finals.

In 1993, the Sky Ryders changed directions to a more contemporary show, including Connotations by Edward Gregson and Symphony No. 2 by David Diamond. The corps finished their last full season of competition in Jackson, Mississippi with a placement of 20th.

Despite scheduled camps for a 1994 season, the corps was finally folded due to continuing financial difficulties. Thanks to the continued efforts of Texas director Paul Proctor, all of the corps’ substantial debt was eventually paid off.

The majority of the information on this page was summarized from “A History of Drum & Bugle Corps, Vol. 2,” edited by Steve Vickers, published by Drum Corps World in 2003. Additional details in the 1980s section were inspired by articles written by Michael Boo and published on DCI.org.